After we investigated the wireless signal that was sent by the Vaillant CalorMatic 340f over the 868MHz frequency and extracted the binary contents in the first part of our series, this second part will now deal with understanding the meaning of the bits and bytes sent to the boiler.

As a quick recap of the first part, the signal from the wireless control is sent at 868.275MHz with OOK modulation. The underlying encoding is differential Manchester encoding (with a signal bitrate of 606Hz, where a transition in the middle of the period indicates a 1 and no transition indicates 0; a transition after each bit period is guaranteed for clock synchronization and does not hold any information). In addition, the bit sequence (except for the final to 0xFF 00 bytes!) is bit-stuffed, so it starts with 0x7E and after every 5 consecutive 1 bits an extra 0 bit is inserted that has to be removed by the receiver before interpreting the signal.

Features of the wireless control

Let's first look at the features of the wireless heating control:

So, the heating and boiler control appears to have some smart logic included. The first question is, whether this logic is inside the wireless control or inside the boiler. In the first case (smart control, dumb boiler), the wireless control would keep the timers and the current state and only signal to the boiler when the heating should be turned on or off. In the second case (dumb control, smart boiler), all information (current temperature, target temperature, date/time, mode, etc.) will be sent wirelessly to the boiler. Of course, the second case would be much more interesting, as this would allow us to later implement a second wireless control that could be implemented e.g. in OpenHAB.

I tried all different combinations I could think of (including low batteries!), and the only information that was sent to the boiler appears to be:

So, there are 8 possible combinations for signals to be sent to the boiler. As we saw in the first part, each signal was followed by a second repeated signal, which has slight differences. So, we have 8 base signals and 8 repeats.

The corresponding observed binary sequences are:

In this table, I already split the binary signal into octets, i.e. bytes.

The individual parts of the signal

All signals start with two 0x00 bytes, which makes perfect sense considering that the physical signal is differential-manchester encoded. The two 0x00 00 bytes simply mean that there will be eight long UP / DOWN impulses, so that the receiver has enough time to synchronize its clock.

The next three bytes 3-5 are also ways the same, but they are not zero. My best guess is that these three bytes are some kind of device ID.

The next three bytes 6-8 are again constant, but mostly full of zeroes. I have not yet found any explanation, so let's just assume they are constant and mostly zeroes.

The next byte 9 varies depending on whether the signal is a repeat or the original signal.

The next byte 10 has different bits for Water ON and OFF.

The next byte 12 has one bit set if battery is LOW and is zero otherwise.

The next byte 13 is always the same.

The next byte 14 is the most interesting, as is changes whenever anything before changes. So, this makes it an obvious candidate for a checksum byte. We just need to figure out how that checksum is calculated.

Re-writing the signal as HEX bytes

Why least significant bit first? That took me a while, too, and it stems from the way the checksum is calculated.

Our sixteen base signals from above now become (again using a little self-written utility):

Byte 14 seems to be some kid of checksum, but it took me quite some time to figure out how it is calculated (and how the bits need to be split and interpreted into bytes).

Let's look at e.g. the four signals for Heating ON + Water OFF (most bytes will be identical, so I have left them out and show only the differences):

Do you notice anything about the checksum? From the first to the second and third signals there is only one additional bit set, and in the checksum one bit is unset. However, going to the fourth is again just one additional message bit set, but the checksum changes considerably… Until you look at the hexadecimal representation with least significant bit first:

See, if any of the bytes in the message increases by 1, the checksum decreases by 1. Or in other words, the sum of the three bytes stays constant. If we had interpreted the message with most significant bit first, this would would not have made sense.

Let's look at other signals that differ only in one byte:

The byte 13 with unknown constant value 0xFD kept bothering me, and a few days after I understood the checksum byte I figured out its meaning too: As I mentioned, bytes 4-12 together with the checksum byte 14 summed up always yielded 0x0300. It seemed strange to me that the 0x03 byte of the sum was somehow ignored, until I realized that 0xFD is actually the binary complement of 0x03, i.e. the checksum is actually not just byte 14, but the two-byte value of bytes 13 and 14. So, our assumption that bytes 13 with a value of 0xFD is some kind of End-Of-Data or separator byte was simply wrong, and it being constant is just a coincidence.

In short, bytes 13 and 14 are the binary negative of the sum of bytes 4-12, with most significant byte first, i.e. bytes 13+14 interpreted as a signed integer is -sum(byte 4-12). As we are summing up only 9 bytes, there will be no overflow, either (which was what was bothering me with the 0x03 when one uses only byte 14 as checksum).

We saw that turning on the heating always meant for byte 11 to be set to 0xB4, while turning off the heating set byte 11 to 0x00 (which is what we would expect). But why 0xB4?

Looking at the manual of the Vaillant calorMatic 340f heating control system, one can learn that the control also has an expert mode for the following settings:

If we switch to analogue mode, we can observe various different values for the heating byte, depending on the current room temperature. Here are a few examples of the heating byte:

Let's print all observed values of the heating byte in correlation with the difference between target and current room temperature: 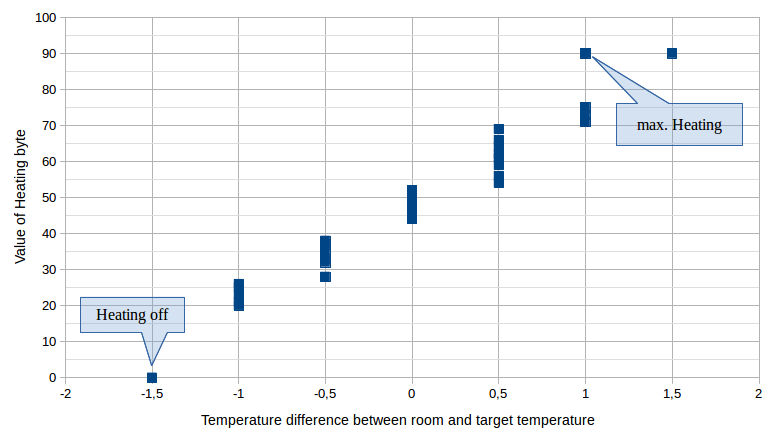 The final indication that we need to fully understand the byte can be found in the diagnosis mode of the control: The manual states that when diagnosis mode is initiated, the boiler will be instructed to heat the water for the heating to exactly 50° C. When enabling diagnosis mode (pressing the „P“ button and the knob together for 3 seconds), the following signal is sent by the remote:

This makes perfect sense: The values observed (for „normal“ room temperatures slightly above 20°C) are between 20 and 90 (decimal). Anything above 90°C for water is already dangerous considering the boiling temperature of 100°C. 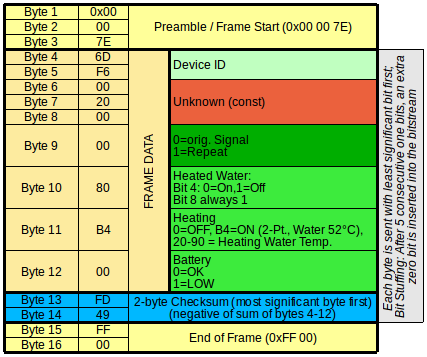 All bytes are converted to a bit sequence with least-significant bit first.

For transmission over the 868,275MHz frequency, the data contents (bytes 4-14, but NOT bytes 3 and 15) are bit-stuffed (i.e. after five consecutive one bits, one extra zero bit is inserted). The resulting bit sequence is then encoded using differential Manchester encoding (1 is encoded as a transition, 0 as no transition) based on an underlying square wave of frequency 303Hz. Each bit period will be a half-wavelength, i.e. there will be 606 bit periods per second. After each bit period, a state transition is guaranteed and does not contain any information, and in the middle of each bit period there will be a state transition for a binary 1 and no transition or binary 0.

Playing around with the operator and installation modes of the Vaillant VRT340f, all signals I found fit perfectly well into the protocol described in the last section, except for one signal: RF detection:

As one can see, the signal is longer, but it still follows the same pattern of the begin and end of frame bytes. Also, bit-stuffing is still used, and the checksum is calculated just like in all other packets. However, there are some differences: the Device ID does not appear at the beginning of the data, but somewhere in the middle. Instead the device ID is 0xFF FF, which probably indicates a broadcast. All other values are completely unknown to me, as they never change.

Implementing support for the device in rtl_433, rflink and/or OpenHAB

Now that we understand both the physical layer of the signal, as well as the structure of the protocol, we can go on to implementing support for it in applications like rtl_433 (part of GNUradio), rflink or OpenHAB in part 3 of our series.